Introduction: Nails are one of the most fascinating appendages of the epidermis. Nail disorders accounts for approximately 10% of all

the dermatological conditions. With increasing age, association of chronic life style disorders increases which further enhance the chances of acquiring various nail changes AIM AND OBJECTIVE: To study the physiological and pathological nail changes due to various dermatological or systemic disorders in the geriatric age group. METHOD AND MATERIAL: Hundred patients above the age of 60 years visiting out patient department of dermatology, venereology and leprosy of tertiary care hospital were included in the study. OBSERVATION AND RESULT: Among 100 patients included in the study the commonest nail change noted was onychorrhexis (97%) and the most common occupation among the study population was agriculture (50%). CONCLUSION: Onychorrhexis was the commonest nail change observed in 97% of patients, which is reported to be a characteristic senile nail change. Many of these nail changes had associated systemic diseases like anaemia, pulmonary diseases, cardiac dysfunction, diabetes mellitus, malnutrition, internal malignancy etc. Awareness of the signs and symptoms of nail disorder in elderly is essential for better assessment and management of the onychological concerns in geriatric age group.

Nails are one of the most fascinating appendages of the epidermis. The basic function of nail is protection, yet it serves many other important functions as well. In animals it is important for their survival, as nails play an important role in hunting, running and grasping. In human,nails provide protection to the nail bed, and may also serve as indicators for disease, aging and even provide beauty and hygiene indications. Human nails have evoked interest of researchers since time immemorable. Nail disorders includes those abnormalities that may affect any portion of the nail unit. Nail disorders accounts for approximately 10% of all the dermatological conditions and are seen more frequently in geriatric population.1,2 The nail changes are more commonly observed among elderly because of the reduced oxygen supply and nutrition to the nail apparatus. With increasing age, association of chronic life style disorders like diabetes mallitus, hypertension, atherosclerosis and malnutrition increases which further enhance the chances of acquiring various nail changes.

Manual workers in industrial and agricultural sectors are at greater risk of developing nail changes because of repeated injuries at work place and exposure to hazardous chemical and inadequate nutrition. In our country, larger population is engaged in agricultural work so in these cases nail changes may be seen at an early age.

This study was conducted to analyse the physiological and pathological changes of nail in geriatric age group.

To study the pathological nail changes due to various

dermatological or systemic disorders in the geriatric age group as well as due to aging process.

The study was carried out in the department of dermatology, venereology and leprosy at a tertiary care hospital.

In the study 100 patients above the age of 60 years were enrolled to study various nail changes.

The onset, duration and progression of nail changes and their location wererecorded.A detailed history was elicitated to detect various precipitating and / or alleviating factors like trauma,medications, mental and physical stress , use of cosmetics, and associated cutaneous or systemic disorders.

A careful general physical, systemic and dermatological examination was carried out and ﬁndings recorded. Relevant investigations like KOH (potassium hydroxide) mount of the nail clippings for fungus, complete haemogram, urine analysis and any other investigations whenever needed to evaluate for associated systemic diseases were carried out and nail biopsy was done in selected cases only.

Patients aged more than 60 years, of both sexes, with nail  changeswere included in the study.

Patients with nail changes due to genodermatoses, congenital disorders and unwilling patients were excluded.

One hundred consecutive patients aged above 60 years, satisfying the inclusion criteria, were drawn for the study at a tertiary care hospital in Jaipur.

Table 2. Distribution of patients by occupation

The duration of nail disorders ranged from 3 months to 30 years with an average of 4.68 years.

History of varying degree of repeated trauma to nail or surrounding area was present in 73 patients out of which 56 were male and 17 were female. 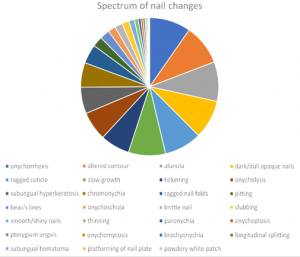 Many of these nail changes were associated with systemic/ dermatological manifestation as shown in table 3.

In the present study carried out at a tertiary care hospital in Jaipur sixty years was taken as cut off age for deﬁning geriatric age group as per health statistics and information system of WHO.3 Among the 100 patients, 71% were male and 29% were female, showingstrong male preponderance. However no signiﬁcant difference in sex distribution of nail disordees was noted by a study conducted by committee for care of nail disorder of Americal   Academy   of   dermatology(Drake    LA).2 History of varying degree of trauma was present in 73% patients making it one of the most common aetiological factors for nail changes in elderly which is consistent with study conducted by Drake LA.2

In our study onchycorrhexis (longitudinal ridging and beading) was the commonest nail change, observed in as many as 97% of patients. Old age was reported to be the commonest cause of onychorrexis in a study by Holzberg M (2000).4

Altered contour of nail plate in the form of platyonychia, koilonychia, increased transverse curvature, pincer nails, irregular dystrophic nail plate and downward bending of nail plate was also present in 95% of cases in our study.

Paronychia was commonly associated with ragged cuticle1,9 and in our study observed among agricultural workers and manual workers including housewives.

History of slowing of nail growth rate was present in 87% of cases with slightly higher prevalence (89%)in patients aged 71- 80 years.

Dark, dull opaque nails were seen in high proportion (91%) of cases, which is yet another important sign of senility of the nails.6 Absence of lunula was found in 93% of our patients. It is reported to be an important senile nail change by various workers in their study done by Lewis BL(1995) and Cohen PR (1996).10,11

Terry’s nail was observed in a total of 13 cases, 6 of these were associated with systemic illness whereas 7 others had no associated disorder. These cases had Terry’s nail presumably due to aging process itself.

One case of half and half nails was documented. This nail  condition is commonly observed in patients with uraemia12, however in our study it was associated with carcinoma of breast. Neapolitan nail is reported as a characteristic nail change occurring in the elderly1. This uncommon change was seen in only 1 patient in our study.

Nixon DW (1976) reported longitudinal and transverse melanonychia after cancer chemotherapy13. Similar changes were seen in 3 patients in our study.

Radiotherapy given elsewhere on body is also known to cause brownish chrmonychia14, which was observed in 1 patient in this study. Similar results haven been reported in a study by Baran R et at (1994). Longitudinal melanonychia can also be seen normally in blacks and Indians14 , and was seen in 2 of our patients.

Thickened nail plate in the form of onychauxis (35 patients), pachyonychia ( 18), hemionychogryphosis ( 10) and onychogryphosis (6 patients) were observed as a manifestation of aging in our study.

On the other hand, 9 patients had thinning of nail plate.15 Anaemia was present in 5 of these patients. Similar results have been reported in study conducted by Baran R, Dawber RPR (1994).14

Onycholysis was recorded in 68 patients in our study out of which 47 were male and 21 were female. It was associated with many systemic and dermatological diseases like anaemia, psoriasis, palmoplantar keratoderma and leprosy.

Subungal hyperkeratosis was present in 62 patients in our study out of which 46 were male and 16 were female. It was associated with psoriasis in 10 patients, leprosy and palmoplantar keratoderma in 1 patient each.

Though combination of onycholysis, subungual hyperkeratosis, brittle nail and chromonychia indicates possibility of onychomycosis, in our study only 3 patients were found to be KOH positive. This implies that these changes may largely be part of aging process.

Nail pitting was seen in 24 patients, of which 8 were probably due to ageing process while the rest had associated dermatological conditions like psoriasis, alopecia areata, atopic dermatitis etc.

Awareness of the signs and symptoms of nail disorder in elderly is essential for better assessment and management of the onychological concerns in gereatric age group.