Angioma serpiginosum is an unusual, benign vascular anomaly localized to the papillary dermis. It is characterized by minute red- coloured macules that can be arranged in various patterns. We hereby report a case of angioma serpiginosum having an atypical presentation with respect to onset, progression and gender predilection.

Angioma serpiginosum is an unusual nevoid vascular anomaly characterized by the presence of multiple, minute bright red spots arranged in a linear, serpiginous, blaschkoid or ‘small-ring’ patterns.1 The common sites of occurrence are extremities with greater predilection for lower extremities. The disease is benign and acquired in nature and may simulate petechiae and port wine nevi; therefore, it needs to be differentiated from purpuric dermatoses and other nevoid conditions.

A 25-year-old male presented to the dermatology outpatient department with complaints of red punctate lesions over his left arm and forearm which had been noticed around 4 years back. The lesions started over the left upper arm and gradually progressed to involve the arm and forearm in a blaschkoid pattern during the course of four years. (Figure 1) Lesions were asymptomatic and were not associated with any history of trauma, contact allergy, fever and swelling and/or joint pain. There was no history of exacerbation of lesions on exposure to heat or cold. Past history and family history were non-contributory. General physical examination showed no signs of pallor, cyanosis and lymphadenopathy and vital physiological parameter were within normal limits. 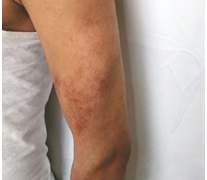 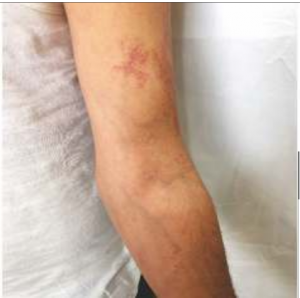 Mucocutaneous and systemic examination did not yield any signiﬁcant ﬁndings. Ophthalmic examination showed a normal fundus with no relevant pathology. Laboratory investigations such as complete heamogram, bleeding and coagulation proﬁles, renal and hepatic function tests were all within normal limits. The lesion was biopsied and the ﬁndings revealed normal epidermis with multiple thin-walled dilated capillaries in superﬁcial dermis. There was no associated inﬂammatory inﬁltrate or extravasation of red blood cells (Figure 6,7). These features were suggestive of a vascular proliferating pathology. 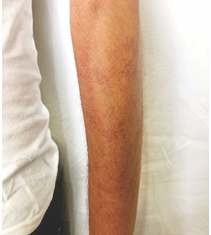 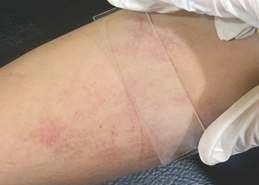 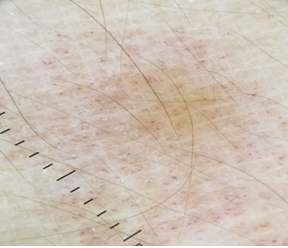 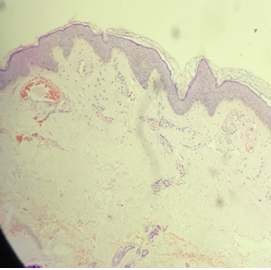 Figure 6 : Histopathology from the lesion reveals normal basket weave pattern of epidermis along with dilated capillaries in superﬁcial dermis without extravasation of red blood cells in the dermis. (H & E Stain, 10X magniﬁcation) 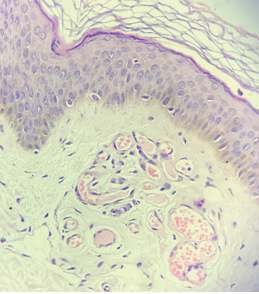 Angioma serpiginosum, a rare vascular tumour, was ﬁrst described by Hutchinson as a peculiar form of serpiginous and “infective” nevoid disease in 1889 and was named by Crocker in 1894.1

It is a benign vascular anomaly which is characterized by the presence of asymptomatic, non-purpuric, copper-coloured to bright red punctate lesions present over an erythematous background which generally follow the lines of Blaschko. It affects both genders and all ages. However, 90 percent of the cases occur in females and 80 percent of them originate before the age of 20years.1 Preferred sites of involvement are lower extremities and buttocks but atypical sites such as breasts and soles may be affected as well. Few reported cases have described extensive involvement affecting the trunk and extremities.2,3,4 Spontaneous involution in partial or complete manner may occur during its course.

Lesions are non-blanchable on diascopy. Dermatoscopic examination shows minute round to oval red lagoons which represent dilated non inﬂamed capillaries in dermal papillae. On histopathological examination multiple dilated, thin-walled capillaries in the dermal papillae and superﬁcial dermis are seen with no angiogenesis. The epidermis is normal with no extravasation of red blood cells. 5

Patients with angioma serpiginosum usually seek treatment for cosmetic purposes. Available therapeutic modalities includes pulse-dye (585 nm) and 532nm potassium-titanyl phosphate (KTP) lasers. Both of these have shown near complete resolution of lesions.6,7 In resource poor clinical settings, where these facilities are unavailable, masking with cosmetics is a suitable treatment option.

As this is a rare disorder, the main aim of reporting this case is to prevent misdiagnosis due to its morphological similarity with other vascular disorders. We would like to emphasize that dermatologists should consider this differential while dealing with purpura and other vascular anomalies to avoid unnecessary investigations.