A CASE OF ACCIDENTAL METHOTREXATE TOXICITY PRESENTING AS MUCOCUTANEOUS ULCERATION

Methotrexate is a commonly used drug in treatment of psoriasis. However, it has a very steep safety proﬁle and, therefore, its usage requires following strict guidelines. Here we are describing a case of acute methotrexate toxicity occurring in a patient of chronic plaque psoriasis following inappropriate self-medication of the drug leading to development of ulceration in psoriatic plaques, mucositis and bone marrow suppression treated with folinic acid.

Methotrexate (MTX), formerly named as Amethopterin,is an antiprolierative and immunosuppressive drug which inhibits mitosis. [1,2]After entering the cell, MTX acts as a Dihydrofolate (DHF)  reductase  inhibitor.[3]    This  enzyme  coverts  DHF to tetrahydrofolate (THF). Its inhibition leads to DNA inhibition. It is used at higher doses (0.5-12g/m2) as an anticancer drugwhile at lower concentrations (1-40 mg/m2) it is effective in inﬂammatory diseases like Rheumatoid Arthritis and Psoriasis to name a few.[4] There are various reports of chronic long-term use of the drug associated hepatic and pulmonary toxicity.[5] But there is still a dearth of reported cases on acute MTX toxicity presenting as cutaneous erosions and mucositis complicated by bone marrow suppression.We are reporting this case for the rarity of its occurrence in literature.

A female patient aged 29-years, with an 18-months history of plaque-type psoriasis involving bilateral lower extremities, buttocks, trunks and elbows, was taking MTX for 7 months. But instead of physician prescribed three consecutive dosages of 5mg at interval of 12 h per week, the patient accidentally started consuming 5mg MTX once a day every day throughout the week.Fifteen days later the patient presented to the emergency department with hemorrhagic erosions and crusting over preexisting plaques of psoriasis, with painful mucosal lesions chieﬂy involving the lower lip. Patient also had fever with malaise.

On admission patient was conscious with respiratory rate 30/minute, pulse 96/minute, blood pressure 142/90mmHg and temperature 99˚F. On physical examination around 10% of the body surface area was involved with presence of ulcerated psoriatic plaques over bilateral lower limbs (ﬁgure 1), buttocks (ﬁgure 2) and elbows. Patient also had hemorrhagic mucositis of oral mucosa chieﬂy involving the lower lip (ﬁgure 3). There were no positive ﬁndings on examination of other organs. 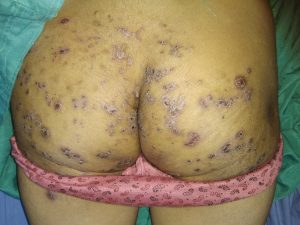 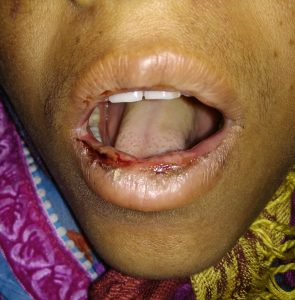 The patient was diagnosed with acute MTX toxicity. MTX was stopped immediately and intravenous folinic acid (as MTX antidote) in the dose of 15 mg was given 6 hourly (1mg/kg) on ﬁrst day followed by 10 mg 6 hourly until counts reverted back to normal. Patient’s intravenous ﬂuid intake was maintained optimally according tourine output and antibiotics were started empirically. The eroded psoriatic plaques were taken care of with topical antibiotics. Mucositis was dealt with a suspension prepared according to Pandya’s formula consisting of a mix of 5 mL each of syrup prednisolone (5mg/ml), syrup Gelusil and syrup Benadryl. The patient was asked to rise the mouth with this suspension for 2 minutes before spitting it out.[7] This was repeated 3-4 times a day until oral lesions started resolving. Patient’s urine output started improving after 24 hours and at 7th day patient’s antibiotics were stopped in absence of any active infective foci. Patient’s vitals were repeatedly reported everyday.

Discussion
MTX toxicity has been reported to occur in both idiosyncratic and dose-dependent manners. Overdosing of MTX is considered to be the most common cause of acute MTX toxicity [6] It can appear with varying manifestations ranging from vomiting, nausea and diarrhea to pancytopenia, myelosuppression, pulmonary, hepatic and renal dysfunction, cutaneous ulcerations, mucositis, stomatitis as well as gastrointestinal ulcerations.[7] Amongst all of these, ulceration of pre-existing lesions is considered as one of the early signs of impending MTX toxicity in Psoriasis patients. [8] The cells observed to be affected the most by MTX are those with high turn over like epidermal, gastrointestinal and bone marrow cells. The effect of MTX on these cells is dose dependent. Drugs like NSAIDs decrease renal elimination and tubular secretion of MTX MTXwhile trimethoprim/sulfamethoxazole contributes of cytotoxicity caused by MTX since trimethoprim is also an antifolatereducatase inhibitor.MTXconcertation in blood and urine can be measured by radioimmunoassay.A confirmative diagnosis can be reached by histological analysis of affected sites.[2] In an ideal setup, any patient presenting with MTX toxicity should be kept in an intensive care unit with reverse barrier nursing. [6] The drug should be stopped as soon as possible followed by prompt treatment with intravenous Folinic Acid (Leucovorin).[2]Lucovorin bypasses the enzyme dihydrofolate reductase and salvages normal bone marrow cell division. The dose of Lucovorin should be titered according to serum MTX level.[6] In case of significant neutropenia granulocyte colony
stimulating factors should be used. Thrombocytopenia is treated with packed red cells of platelets transfusion. Other supportive measures include intravenous fluids,antiemetics and urine alkalizers. In case of impaired renal function Glucarpidase, in the dose of 50 U/kg body weight as a single intravenous injection, can be used to convert MTX into its inactive metabolites.[9] Hemodialysis and hemoperfusion might be required is serious cases of toxicity. The use of corticosteroids in MTX toxicity is debatable since there is a scarcity of large trials suggestive its efficacy and it may also lead to superinfections.[10] The eroded plaques incase of MTX toxicity in psoriasis mostly require just supportive care and heal in 1-2 weeks.Mucositis is treated by proper oral care and topical coating agents like Sucralfate suspension. Specific mixture consisting of a mix of 5 mL each of syrup prednisolone (5mg/ml), syrup Gelusil and syrup Benadryl, also known as Pandya’s formula, is also used for rinsing.[6] Eventhough, if not diagnosed and treated timely, MTX toxicty can be lifethreatening, prompt treatment of patients in ICU and emergency department can reduce mortailty rates. Proper patient councelling before presciribing MTX can all together eliminate such accidents.