POHL PINKUS LIKE CONSTRICTIONS IN LICHEN PLANO ILARIS ON DERMOSCOPY

Sir,
A 32 year old female presented with complete loss of hair over the scalp since 5 years (Figure 1). Treatment taken in the past was not effective and she still complained of new lesions with loss of hair. Skin of the alopecic patch involving almost the entire scalp sparing only the peripheral rim of hair line throughout, appeared shiny and atrophic and hair pull test from the periphery of the alopecic patch was positive. 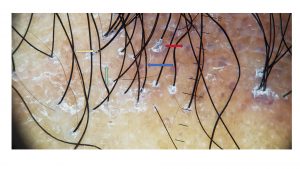 Multiple pohlpinkus like constrictions were seen throughout the hair shaft probably suggestive of the multiple episodes of trauma that the hair experienced each time there was a flare of the disease. Integrin expression has a role in cell cell adhesion , epidermal differentiation and migration , its altered expression is seen in active lesions of lichen planus pilaris and probably the reason for pohlpinkus like constrictions here. Trichogram revelaed floppy sock appearance due to roughened cuticle. To conclude, lichen planopilaris is the most common cause of
cicatricial alopecia. It frequently affects middle-aged females with irregular areas of atrophic alopecia on the scalp. Dermoscopy can act as a useful non-invasive aid in diagnosing lichen planopilaris .