Sir,
Dermoscopy plays a very important role in differentiating this benign, vasoproliferative disorder from ominous diseases such as Kaposi’s sarcoma, Kimura’s disease and cutaneous metastases. Dermoscopic signs, reported herein, and in a sevencase- series by Padilla et al include linear vessels, red dots, red lacunae, ulceration over a pale red background, when ALHE is examined under polarizing dermoscopy. In our observation of three cases, we found another sign – the Chrysalis sign, which is an established sign in a few conditions, viz., basal cellcarcinoma, melanomas, dermatofibromas and scar tissue . But this has not been reported in conjunction with ALHE.

In our cases, the site of presentation varied from the centro-facial region, to the concha of the ear and scalp. (Figure-1) Ulceration, with or without frank hemorrhage wa snoted in two cases. All three cases showed a central, yellow structureless area with chrysalis-like, white streaks on a homogenous red background with few linear and dotted vessels. This chrysalides pattern is seen, particularly, as short, white orthogonal and parallel streaks, akin to the structural framework of the pupa, an intermediate stage between larval and adult life in a butterfly or a moth, and hence the nosological analogy. It is seen exclusively on polarized dermoscopy due to refringence from the hypertrophic or disoriented collagen in the dermis. (Figure-1)Fig 1 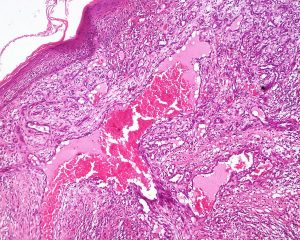 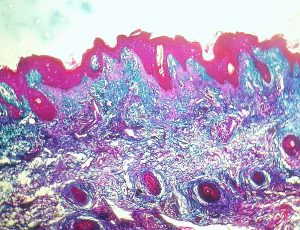 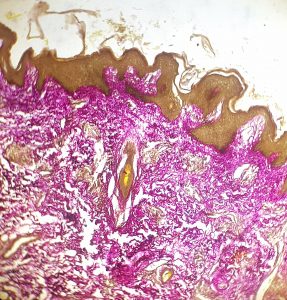 All three cases underwent a skin biopsy to confirm the diagnosis. Hematoxylin and eosinstaining revealed multiple proliferating blood vessels with abundant extravasation of RBCs and a few eosinophils in the dermis. These changes were consistent with ALHE. Haphazardly arranged collagenfibers and bundles were noted, in both vertical and horizontal orientations, which was confirmed on staining with Verhoeff Van-Geison and Masson’s trichrome (Figure-2). This disorientation contributes to the Chrysalis-like pattern. We analyzed the dermoscopic pictures by Lomba et al and noticed features consistent with the Chrysalis sign, and we discussed the same with the principal author. This sign should be added to the dermoscopic constellation of ALHE, to further knowledge on this enigmaticentity.