A SKIN COLOURED PLAQUE OVER BACK – MIMESIS OF BENIGN TUMOURS

Fibroepithelioma of Pinkus (FEP) is an uncommon tumour in Indian population. FEP clinically resembles a variety of benign skin tumors which are not routinely excised or biopsied. Diagnostic conﬁrmation is necessary becausethe nature of this tumor remains a subject of debate.

Fibroepithelioma of Pinkus (FEP) is rare and often misdiagnosed clinically as it imitates multiple benign skin tumours . Some authors argue that the relative rareness of this tumour is mainly because of its misdiagnosis. Differential diagnosis in case of FEP is dermal nevus, ﬁbroma, acrochordon, and seborrheic keratosis, which are not routinely excised or biopsied . Dermoscopy and confocal microscopy have emerged as non-invasive tools but histopathology remains the gold standard for diagnosis.

An 89-year-old male, presented with an asymptomatic skin colored to reddishlesion over back for 6 years. The Lesion had slowly grown to present size over a period of 6years.

Examination revealed a solitary, non-tender skin coloredplaque of size 4×3 cm with non-tender central erythematous nodule.Surrounding the plaque there was a rim of brown-black hyperpigmentation present. [Figure1] 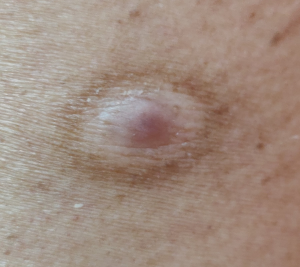 Figure 1 : A solitary, non-tender skin coloured plaque of size 4×3 cm with non-tender central erythematous nodule with a rim of hyperpigmentation. 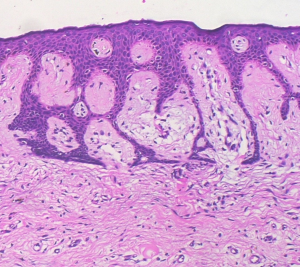 Figure 2 : Epithelial neoplasm that shows a connection with surface epidermis at several places.

Histopathological examination revealed epithelial neoplasm that shows a connection with surface epidermis at several places [Figure2]. The tumour islands were made up of small round cells that show uniformly stained and dark nuclei no nucleoli.The neoplastic cells were arranged in a proliferation of thinned out rete ridges with small bulbous ends that show hair germ like appearance[Figure3].The surrounding stroma shows ﬁbroplasia [Figire4]. There were no clefts between the stoma and the epithelium.

Fibroepithelioma of Pinkus was ﬁrst described by Hermann Pinkus . It presents as ﬂesh-colored to a pink solitary, sessile or pedunculated papule, plaque or nodule on the trunk often  resembling a ﬁbroma, intradermal nevus, seborrhoeic keratosis, achrochordon . But large pedunculated, polypoid or ulcerated 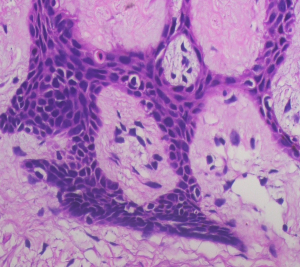 Figure 3 : The neoplastic cells are arranged in a proliferation of thinned out rete ridges with small bulbous ends that show hair germ like appearance.

cases have also been reported . It is commonly reported to occur in adults aged 40–60 years. However, a few cases in the pediatric population have been reported .The strong predilection for the lumbar region and for the female gender differentiates FEP from other BCC subtypes that usually arise on sun-exposed areas andpredominantly in males .

The gold standard diagnostic test for FEP is a   skinbiopsy for histopathologic  examination.  It  consists  of  basaloid cells. 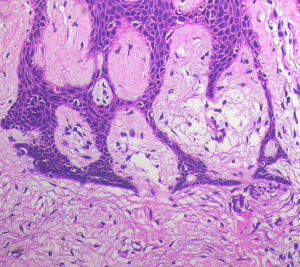 Hermann Pinkus initially classiﬁed it as a premalignant ﬁbroepithelial tumor .Later on, FEP was classiﬁed as a subtype of basal cell carcinoma, although some consider FEPas a variant of trichoblastoma . Some consider it as a benign and unusual counterpart of BCC, while others think it a malignant neoplasm .Finding such as expression of androgen receptor is shared by BCC and FEP, which is minimal in trichoblastomas; whereas FEP and trichoblastomas display Merkel cells, which are usually absentin BCC . In another study, authors found that tumour-speciﬁc type of epithelial hyperplasia in FEP that is positive for the stem cell marker PHLDA1 and present a unifying concept of FEP as a subtype of BCC.

Recent research highlights the fact that bcc and trichoepithelioma share common cell origin,which is the epithelial stem cells of the hair follicle. So it is proposed that FEP might be a trichoblastic tumor intermediate between trichoepithelioma and bcc .

There are case reports showing an association of nodular bcc with FEP supporting its malignant nature . So its classiﬁcation still remains controversial.

Local excision of FEP is recommended treatment of choice and is almost universally curative without recurrence. Our patient 89-year old male also presented as an asymptomatic plaque with central nodule over back. Dermoscopy or confocal microscopy was not done in our case but histopathological examination did demonstrate classic histopathologic features for FEP (Figure 2,3,4). The morphological resemblance to benign skin tumours is one of the cause for its misdiagnosis and relative rareness. In the light of controversial malignant nature of FEP,early diagnosis and curative treatment with complete local excision are mandatory.