Introduction : Acne vulgaris is one of the most prevalent skin disorders caused due to androgenic stimulation of sebaceous gland, abnormal follicular hyper keratinization, obstruction of pilo-sebaceous follicle.

Aims and objectives : To compare the efﬁcacy and tolerability of 35% Glycolic acid and 30% Salicylic acid peel in the treatment of grade II Acne vulgaris patients.

Materials and methods : The patients were graded as per universally accepted grading system i.e. Global Acne Grading and randomly assigned in two groups (Group A & Group B), where one group received 35% glycolyic acid peel & other received 30% salicylic acid peel.

Results : Both Glycolic acid and Salicylic acid peel were found to be safe and effective in the treatment of Grade II acne. Superior improvement was seen in Salicylic acid group. The overall reduction of Acne Vulgaris lesions in Group A was 67% and in Group B was 79%.

Conclusion : Alpha and Beta hydroxy acid peels, both are useful options as monotherapy for patients reluctant for oral therapy. These peels are considered to be very useful for those patients who are intolerant to oral medicaments.

The skin overlying the face is particularly important, as its appearance has a signiﬁcant bearing on psychological well being of a person. Acne vulgaris is one of the most prevalent skin disorders and is the most common reason for visit to dermatologists.

Acne vulgaris is a disease of pilo-sebaceous unit. The pathogenesis involves androgenic stimulation of sebaceous gland, abnormal follicular hyper keratinization, obstruction of pilo-sebaceous follicle followed by its inﬂammation and the presence of propionibacterium acnes.

Comedones (blackheads especially) are the pathognomonic feature and the earliest microscopic lesions observed in acne vulgaris. Comedones develop due to the obstruction of follicular duct. The obstructed and infected follicle can rupture, leaking its content into the dermis, causing inﬂammatory lesions such as papules, pustules, nodules and cyst formation.

Some of these severe lesions can also lead to scarring and disﬁgurement of the face which can cause signiﬁcant psychological morbidity in patients.

Several topical and oral treatment options are available for the management of acne vulgaris. With time, the several modalities of treatment have evolved. Initially treatment was with oral medications, shifted to topical agents, and oﬂate there has been signiﬁcant advances and development of new techniques to improve outcomes.

As per the European Academy of Dermatology and Venereology recommendations, the use of chemical peels; mainly Glycolic acid (GA) and Salicylic acid(SA), in acne vulgaris is well supported. Both glycolic acid and salicylic acid peel are superﬁcial peels.

Glycolic acid(GA) an alpha hydroxyl acid is a hydrophilic compound often used in chemical peels due to its desquamating properties. Glycolic acid peel concentration varies from 20%- 70%. At concentration around 30-35%, GA peel induces epidermal exfoliation by decreasing corneocyte cohesion whereas at higher concentration GA peels are associated with more destructive changes due to increased epidermal enzyme activity resulting in epidermolysis. Given their low acidity, alpha hydroxy acid needs to be neutralised with alkaline solution such as sodium bicarbonate.

Salicylic acid(SA), a lipophilic beta hydroxyl acid, also reduces corneocyte cohesion and performs well on sebaceous area of the face. It has keratolytic property and can be used in various concentrations, commonly 20-30%. Salicylic acid peel has anti- inﬂammatory effects which reduce post peel erythema as well as anaesthetic effect to reduce discomfort. Salicylic acid induces a white precipitate within 1 minute of application and does not require neutralization.

Given their comedolytic property both SA & GA have shown to substantially improve comedonal acne. Salicylic acid peel and glycolic acid peel shows improvement in both inﬂammatory and non-inﬂammatory acne. In inﬂammatory acne the overall improvement is based on total number of sessions of chemical peel. However, a transient ﬂare of papule and pustule in ﬁrst several weeks of treatment is a common occurence.

There are several adverse effects of superﬁcial peeling agents. The post-peel erythema may persist for the initial 5-7 days. This may be followed by post inﬂammatory hyperpigmentation. The affected area may get infected (bacterial, fungal, viral) and may even lead to permanent scarring.The most common site of such scars is the perioral and mandibular region.

To compare the efﬁcacy and tolerability of 35% Glycolic acid and 30% Salicylic acid peel in the treatment of grade II Acne vulgaris patients.

This study was carried out in the department of dermatology, venereology and leprosy at a tertiary care hospital.In the study 60 patientswith clinical diagnosis of Grade II Acne vulgaris were included.

Patients were informed about the nature of study and written consent was obtained before including them in the study.

Dermatological examination for acne included the site of involvement and total number of comedones, papules and pustules and nodules which were counted and graded. The patients who fulﬁll the inclusion criteria were divided randomly into two groups of 30 patients each.

Serial photography of patients was taken before commencement of therapy, before each session and after completion of therapy.

The patients were asked to avoid use of cosmetics or any other home remedies. Pre and post peel, non-comedogenic sunscreens were prescribed.

Patients were asked to wash the face with soap and then de- greasing with spirit was done. The chemical peels selected (either glycolic acid or salicylic acid) was applied over the face starting from the forehead, cheeks, chin, nose and upper lips. After three minutes they were asked to wash the face and slight massage with ice pack was done. Then sunscreen was applied and patients were advised to protect from sunlight by using sunscreen at day time. This procedure was repeated every two weeks for 3 months. During each visit any side effect attributed to the peel was recorded. The local tolerability of the peel was evaluated by recording the degree of irritation, erythema, dryness,burning and peeling.

Table 1. Distribution of patient according to sex

Table 2. Distribution of Patient According to Occupation

Table 3. Distribution of Patients of Acne Vulgaris According to the Aggravating Factors.

In the present study, 35(59%) were students, 10 (15%) were employee, 8(14%) were self-employed and 7(12%) were farmers. None of the ptients were employed in occupation involving substances that are acnegenic.(Table 2)Table 1,2,3In this study group as per the history obtained from patients, following precipitating factors were recorded.(Table 3)

Table 4. Distribution of patient according to treatment received

The distribution of patients in two groups, Group A, receiving 35% glycolic acid peel and Group B, receiving 30% salicylic acid.(Table 4)

Table 5. Observation of responses with Glycolic acid peels in Group A patients with GradeII Acne vulgaris 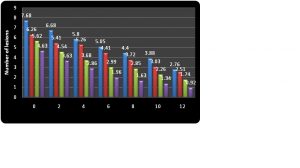 These patients showed a rapid and sustained reduction in the inﬂammatory and non inﬂammatory lesions. After 6 weeks of 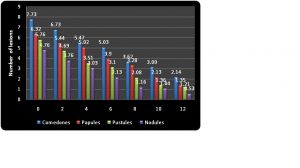 treatment, there was a good reduction of lesions and no emergence of new lesions. At the end of 12 weeks 79% of lesions had subsided.Fig 3, 4a,b, 5a,bThe overall reduction of Acne Vulgaris lesions in Group A was 67% and in Group B was 79%. (Figure 3, Figure 4a and 4b, Figure 5a and 5b) 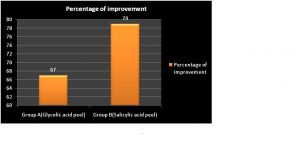 Figure 3 : Percentage reduction of Acne lesions in patients under Group A and Group B.

These peels were very well tolerated both in immediate and post peel period with fewer side effects.Erythema, burning, dryness, excessive peeling and hyper pigmentation were observed in few patients, more so in patients undergoing glycolic acid peel.However, these side effects were temporary and improved over subsequent visits.None of the patients discontinued treatment because of the side effects

The present study included 60 patients presenting to the Dermatology, Venereology & Leprosy OPD of National Institute of Medical Sciences & Research, Jaipur with clinical diagnosis of grade II acne vulgaris. These patients were examined and the ﬁnding were recorded on proforma and analysed.

The present study was conducted to compare the efﬁcacy of 35% Glycolic acid and 30% Salicylic acid peel in the treatment of Grade II Acne vulgaris.

Acne vulgaris is commonly encountered disorder at dermatology clinics. It has a signiﬁcant negative psychological impact. Acne frequently resolves to leave behind sequela in the form of scarring andpigmentation. Chemical peeling has shown to be an effective therapeutic option in the treatment of active acne lesions and post-inﬂammatory hyperpigmentation. 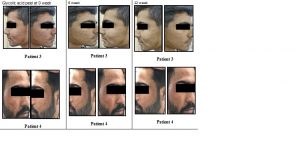 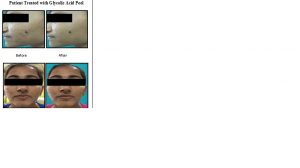 Figure 4a and 4b : 4a and 4b: Serial photographs showing improvement in patients treated with 35% glycolic acid. 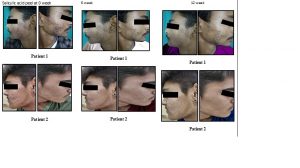 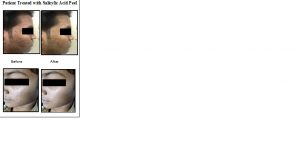 Figure 5a and 5b : Serial photographs showing improvement in patients treated with 30% salicylic acid

Salicylic acid is beta hydroxy acid peel. It has a comedolyticeffect and can penetrate the sebaceous glands because of itslipophilic nature,thus affecting follicular keratinization. It also decreases inﬂammatory lesion count by acting on arachidonic acid cascade. In this study, salicylic acid peel group showed signiﬁcant improvement in inﬂammatory acne lesions compared to the glycolic acid peel.(12)

In present study mean age of onset in male was 18.5 years and for females was 18 years. Similar ﬁnding was observed by Al- Ameer et al and Supreeti et al .The earlier onset of clinical acne in girls than boys is presumably related to their early onset of puberty.

These studies correlate clinically with our present study where acne ﬂared up in 41.1% cases in stressful condition.

In the present study, out of the 19 female patients, 15 (81.8%) had a ﬂare of acne in the premenstrual period.Similar results observed by Cunliffe et al and Lauren et al in their study that acne symptoms worsenedduring menses. Premenstrual ﬂare is possibly related to a premenstrual change in the hydration of the pilosebaceous epithelium.

Since milk contains androgenic hormones and other bioactive molecules, moderation of milk intake may be useful as part of the management of teenage acne.

Among the smokers about 80% gave a history of exacerbation of acne severity on smoking.

Impaired vaso-reactivity, relative ascorbic acid deﬁciency, impaired collagen synthesis and wound healing in smokers may play some part in the underlying pathogenesis for the association between smoking and acne.Schafer et al. and Chuh et al. in their studies observed that smokingis likely to bear a positive association with acne.

In present study 30% Salicylic acid and 35% Glycolic acid peel were used for the treatment of grade II acne vulgaris patients.Both peels were safe and well tolerated with fewer side effects observed with gylcolic acid.

Both Glycolic acid and Salicylic acid peel were found to be safe and effective in the treatment of Grade II acne, with slightly superior improvement in patients undergoing Salicylic acid peel. They were very well tolerated both in immediate and post peel period with fewer side effects.

Alpha and Beta hydroxy acid peels, both are useful options as monotherapy for patients reluctant for oral therapy. These peels are considered to be very useful for those patients who are intolerant to oral medicaments.

The limitations of our study was short follow-up period.